Nijmegen was awarded the title of European Green Capital 2018. First things first: do you actually know what a Green Capital is? If so, are you aware of the reasons why the title was created? Can you name Nijmegen’s predecessors? And its successor? We’ll come to that, but we want to give you some time to think about it while we explain the basics.

Getting the basics right

The European Green Capital Award is an initiative that was first taken by 15 European cities (Tallinn, Helsinki, Riga, Vilnius, Berlin, Warsaw, Madrid, Ljubljana, Prague, Vienna, Kiel, Kotka, Dartford, Tartu and Glasgow) and the Association of Estonian cities on 15 May 2006 in Tallinn, Estonia. It was launched by the European Commission in 2008 and the title was awarded annually since 2010.

The award was created considering that on one hand about two thirds of Europeans live in towns and cities nowadays; on the other hand, urban areas concentrate most of the environmental challenges that our societies face.
Therefore, the title is awarded to acknowledge the efforts towards sustainability done by a specific European city. In order to get and hold the title for a year, a city must:

In this way, the initiative raises awareness to the problem of sustainable urbanisation in all its facets – mobility, energy, circular economy, green living, food, health, air quality and so on. It also provides an incentive to strive for high levels of urban sustainability. Moreover, it pinpoints concrete models that should serve as inspiration for other cities.

The route maps allow you to see at a glance everything that is happening in relation to a particular theme.They also offer an overview of places you can visit and therefore also bridge the citizen with those companies and organisations in Nijmegen that lead the way with regard to sustainability.

The overall goals of the city programme are:

Regarding smart mobility more specifically, sustainable and clean transport is at the centre of the programme. Nijmegen strives for an easy and well-functioning system that keeps users (and citizens in general) healthy and limits air pollution to the minimum. The objective doesn’t seem a long way down for a city that has been nominated the Cycling City of the Netherlands and runs a public bus fleet fuelled by green gas. Yet, the Green Capital wants to be even greener by improving the infrastructure to incentivise car drivers to switch to more environmental-friendly means – bikes, e-bikes or at least car-sharing. 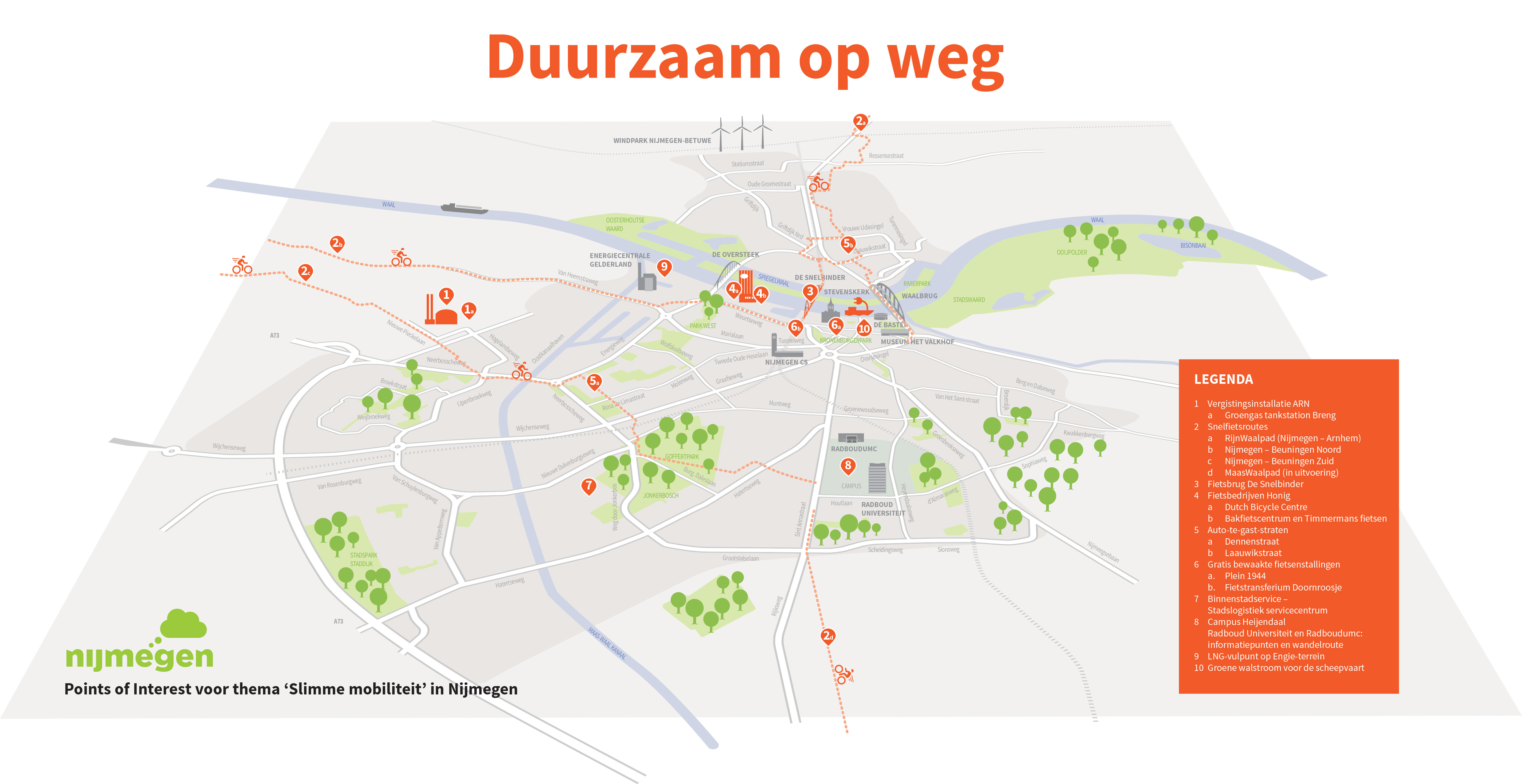 If you have more questions, check the dedicated programme website or try to have a look at the EGCA page on the EUROPA portal and see they have an answer for you.