Presentation Day for BartOn The Move

Presentation Day for BartOn The Move

4 academics, 2 local elected councillors, 4 transport providers and 58 citizens met on 23 June 2018 at the Barton Neighbourhood Centre for the Cities-4-People Presentation Day. This is not the beginning of a joke. It is part of the magic of this project: bringing together people with different backgrounds, needs and perspectives to try find together a solution for mobility challenges.

The key objective of the Presentation Day was to give the Barton Community a better understanding of how the DRT solution provided by PICKMEUP functions so that the community can develop stronger ideas and concepts. The Presentation Day was also used as an opportunity to get the word out about what the Cities-4-People project has been doing/is planning in Barton, raise awareness about upcoming events (e.g. Hackday on 14 July) and grow the BartOn The Move Community. Moreover, the event helped our local team collect more data about how the demand-responsive bus service would be used and gather ideas on how it could be made more accessible.

During the day, activities were planned in order to involve families and a larger variety of stakeholders. For example, a drawing workshop was organised together with a local artist for children and parents. Two other community groups also presented their projects: the Healthy Urban Mobility (HUM) and the National Health Service. HUM told people about the work they are doing to identify and promote heathier forms of mobility, collecting information from them about where they would like to walk and cycle in Oxford and what barriers existed that prevented them from doing so. Representatives from the NHS talked to participants about the service, collecting anecdotes about peoples’ experience with the NHS as part of a celebration of the 70th anniversary of the National Health Service. 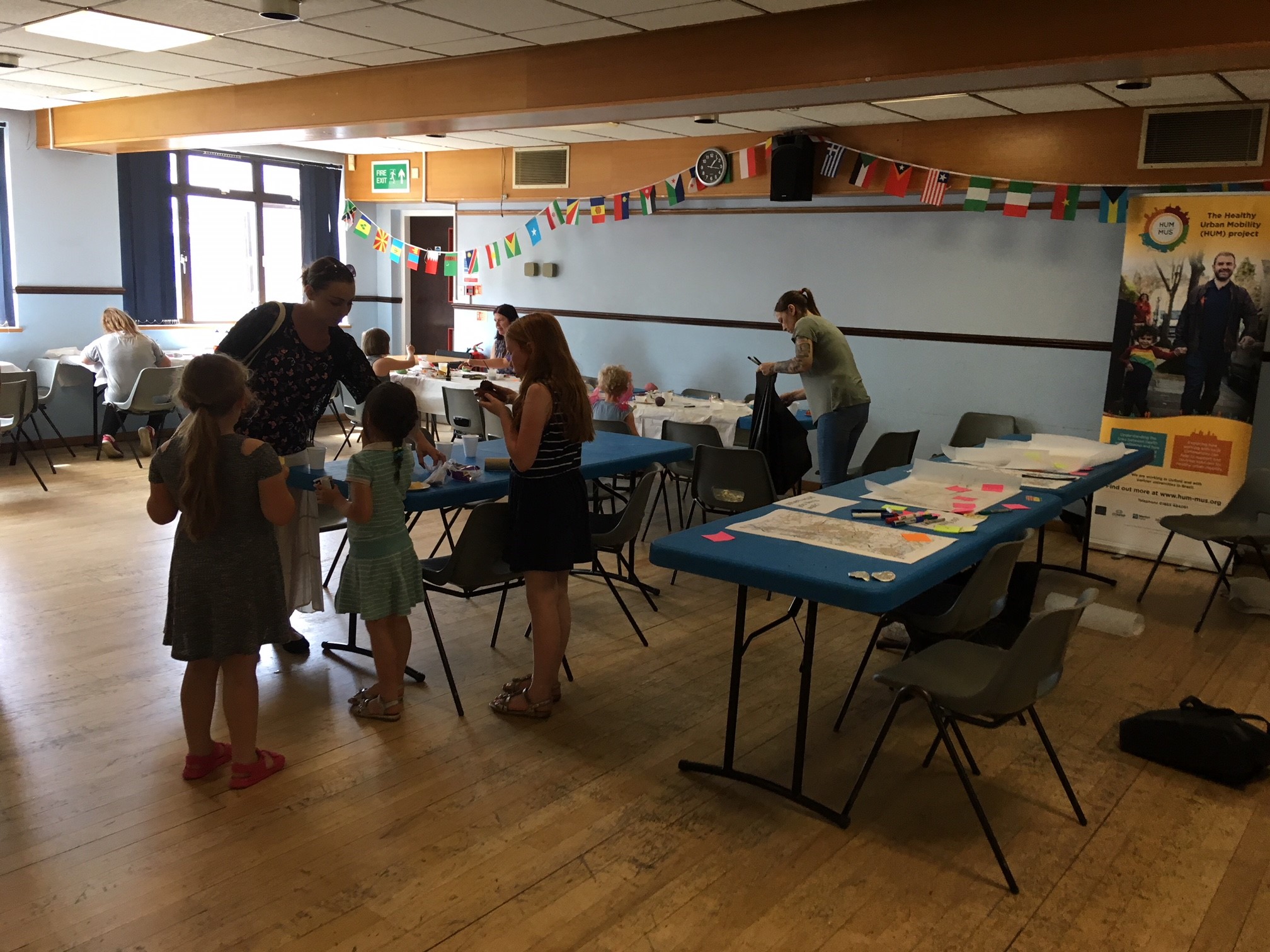 As participants arrived at the event they were guided to the PICKMEUP display, where representatives from Oxford Bus Company explained how the demand responsive service worked. This included assistance in downloading the app that will be used to request rides on the PICKMEUP bus. Participants were given a tour of the new buses that will be used in the PICKMEUP service. Thanks to the involvement of the Transport Museum of Long Hanborough in the event,  people could compare the new fleet with a vintage bus from the Transport Museum that had serviced Barton and Oxford 40 years earlier. 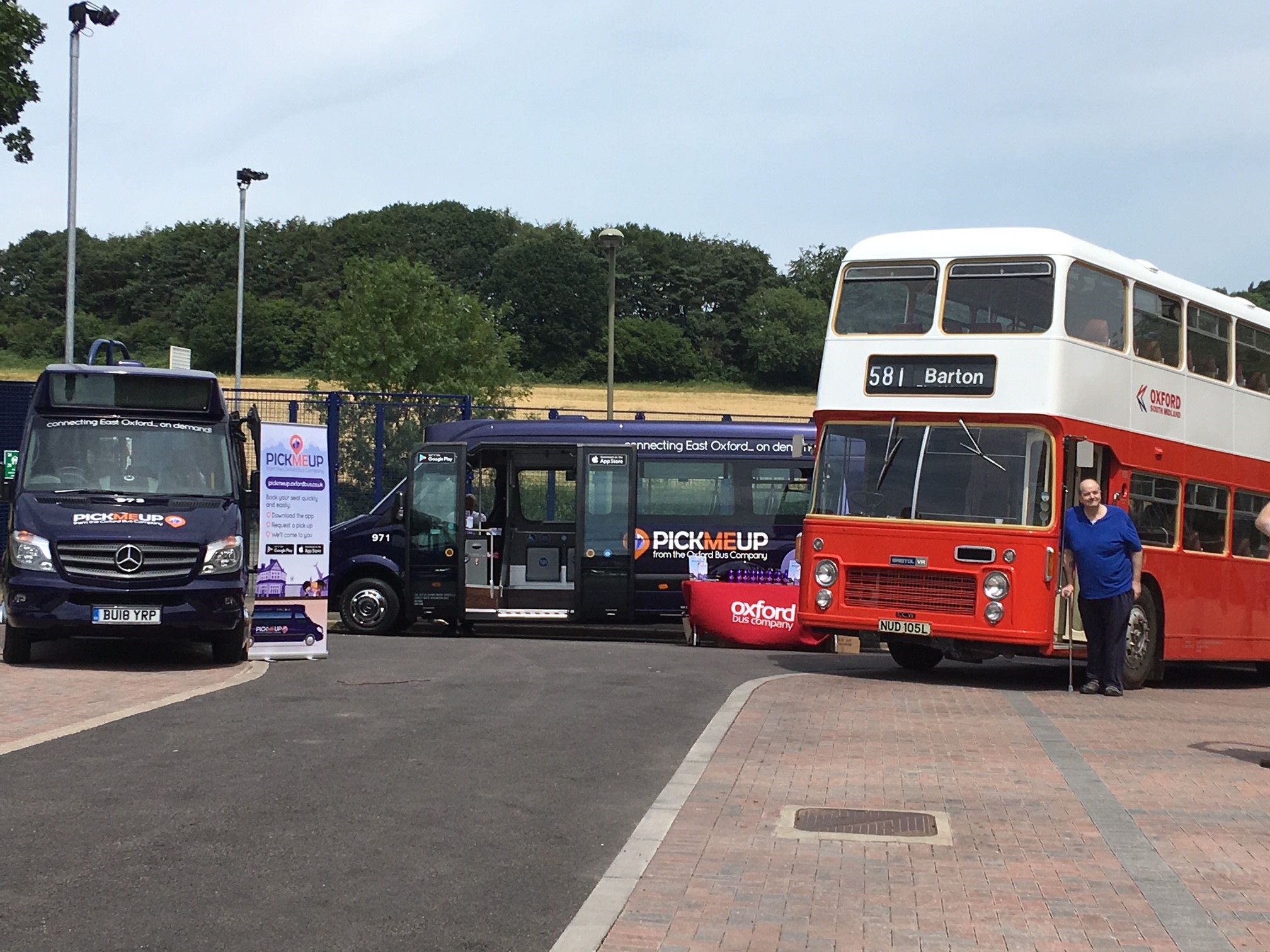 Once participants had found out about the PICKMEUP bus they moved on to the Cities-4-People stand. Here, participants could learn more about the Citie-4-People project and the steps taken by the Barton Mobility Community to identify the mobility challenges in Barton, develop solutions in Mobility Labs activities, and move towards the pilots of the interventions planned for the spring of 2019. Participants were then invited to give input on how they would use the PICKMEUP service, as well as who might have difficulty accessing the service and why. The interactions with citizens confirmed that the interest in the service is high, but many of the people who would most benefit from the service (elderly, people with disabilities) would find it difficult to use due to the app-based booking system. Based on this input, participants were then asked to put forward an idea for how the barriers to using the PICKMEUP service could be overcome using the Idea Dashboard. Having representatives from Oxford Bus Company proved helpful to overcome the intimidating effect of downloading and using the PICKMEUP app and emerged as an idea to increase the accessibility of the service. 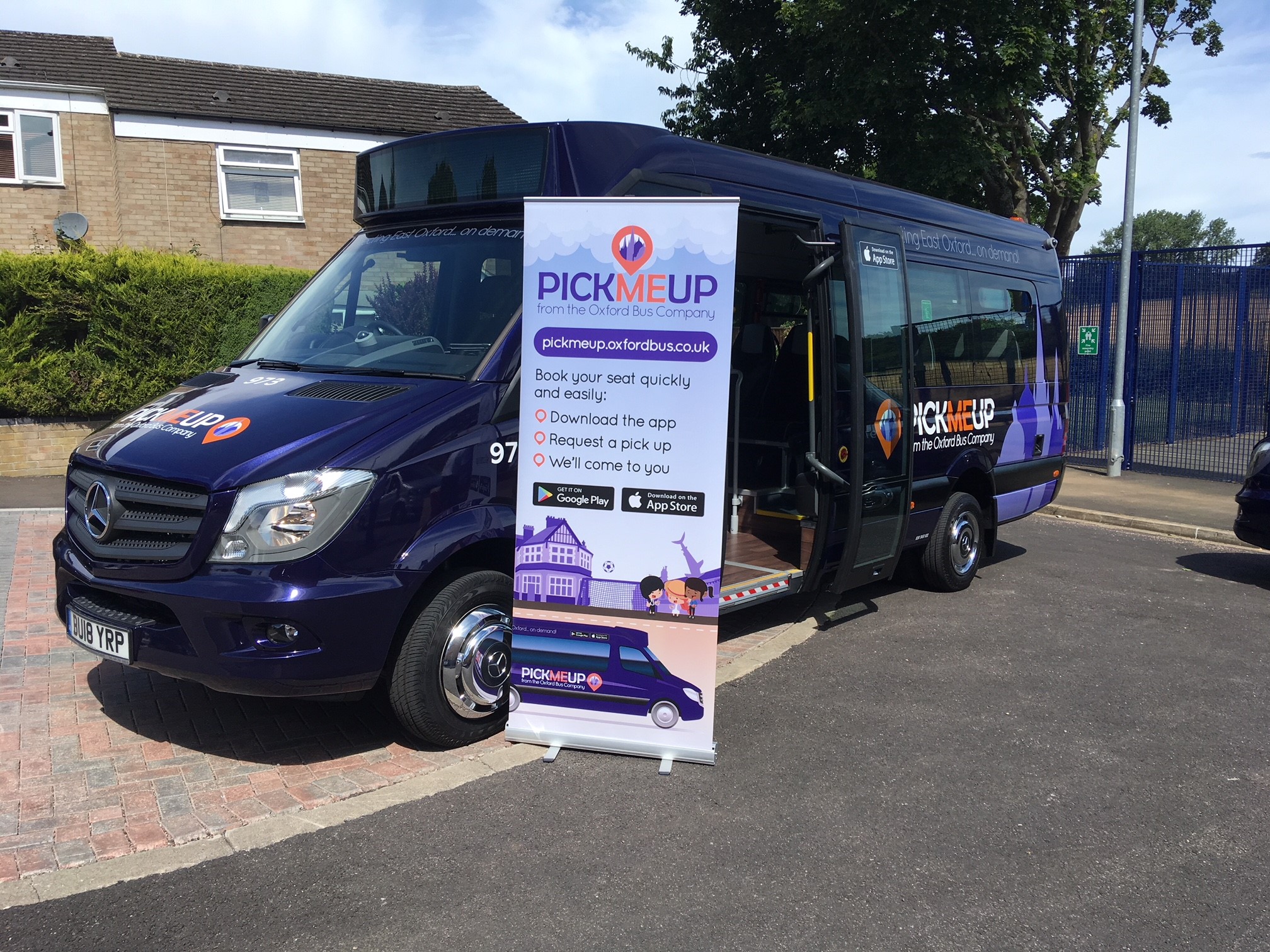 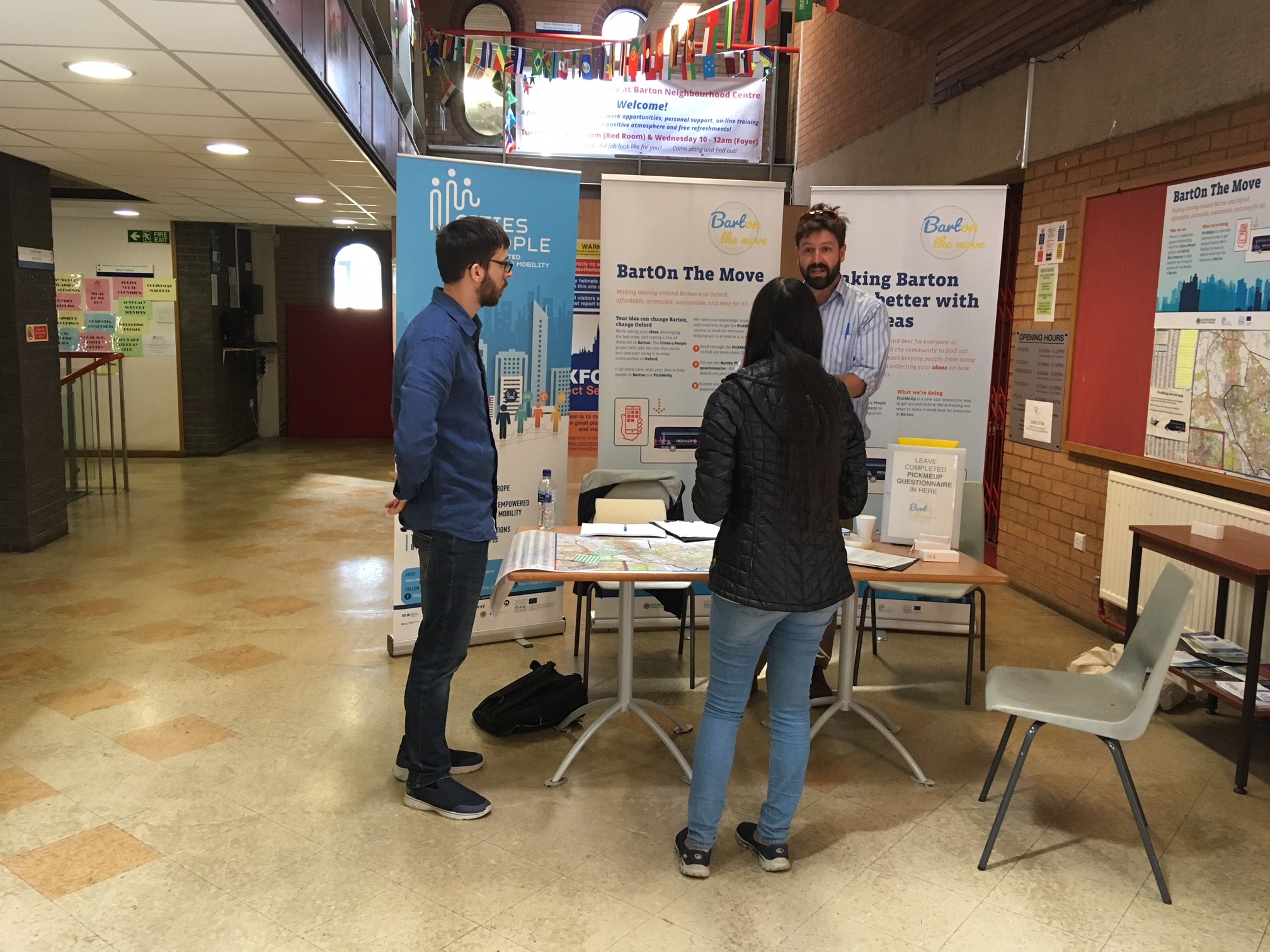 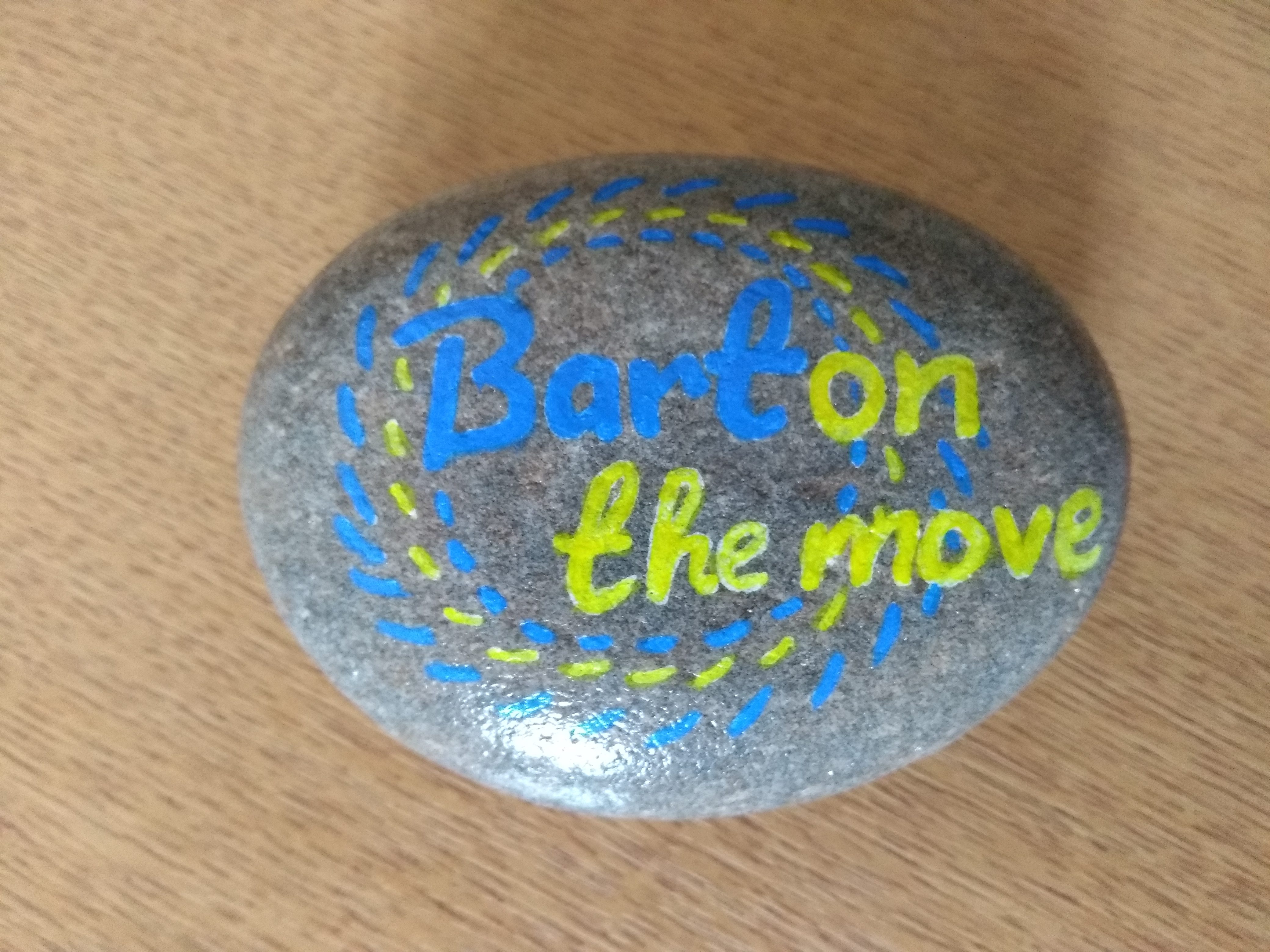