Home Event Prototyping in Oxford – round 2

Prototyping in Oxford took place on 28 August 2019 at the Barton Neighbourhood Centre. The event was included in the Barton Bash, an annual fair held in the Barton Neighbourhood Centre. This is the largest event held in the neighbourhood and therefore, this represented an ideal occasion to reach out to the community. The event was indeed a success, about 150 citizens and 10 local authority members were present at the event. A booth was reserved for Cities-4-People and during the event participants had the possibility to contribute on the YourPriorities tool using a tablet.

During the Presentation Day and QHS meeting, the Mobility Community in Oxford decided to scale up the ‘Supermarket Transport’ pilot and to extend it to surrounding villages with limited supermarket access. The scale up will increase the outreach of the intervention, including people from multiple villages in one trip.During the Hack Day, seven possible transportation routes were co-created. The prototyping event aimed to improve pilot journey scheduling, identifying ideal times and destinations, the kind of route that would efficiently connect the communities to the target places and the demand in these communities. Two main tools were employed at the Cities-4-People booth at the Barton Bash:

The event allowed our local team in Barton to get a better understanding of the preferred ideas, routes, and times. The plan now is to run a trip from Otmoore villages to Thornhill Park and Ride (a transport hub that can provide access to other buses that go into the city of Oxford, hospitals, and airports). This route can be combined with a route going from Barton to Asda (grocery store).

Now, pilot coordinators plan to continue iterative testing to plan a realistic and clearly defined pilot. This will be done by testing the schedules and routes during actual times and with actual participants.

Stay tuned for all updates! 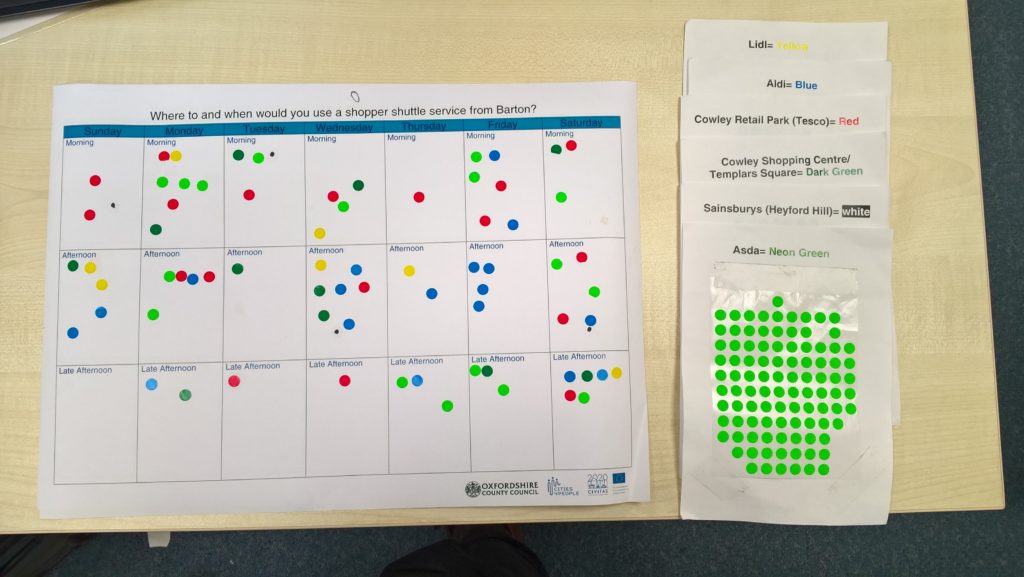